A Night in a Train – Hot Chocolate at Codrington Gardens, Codrington, Victoria, Australia 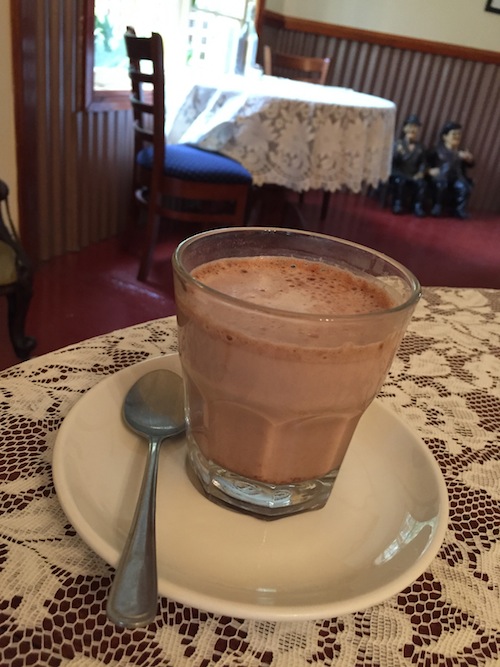 I mentioned in an early blog that on this trip we had a hard time finding accommodation for the two nights. In the end we found a really interesting and unique option: an old train.

The property used to be known for its gardens, and many of the locals we spoke to still remember way back when they would pay an entrance fee to visit the once beautiful gardens. Today the gardens aren’t quite up to their former glory, but nicely surround all of the accommodation options.  We had a few trains to choose from including the “Port Fairy Flyer from 1894, the Overland Train from 1907 but we chose the Bondi Express, a double decker train that used to run on the Bondi to Cronulla line in the 1950’s in Sydney and was decommissioned late 1980’s. It somehow got here and was converted into two bedrooms with queen-sized beds and a small living room as well as a bathroom with shower and a small kitchen. Along the side of the train there was a covered terrace with a view over a field of friendly alpacas and a wind farm on the hills in the distance. The train was surprisingly clean, well organized and spacious, and each train was surrounded by lush gardens which provide a lot of privacy between the different properties. If you aren’t so keen on sleeping in a train there are some cute little cottages on the property as well. 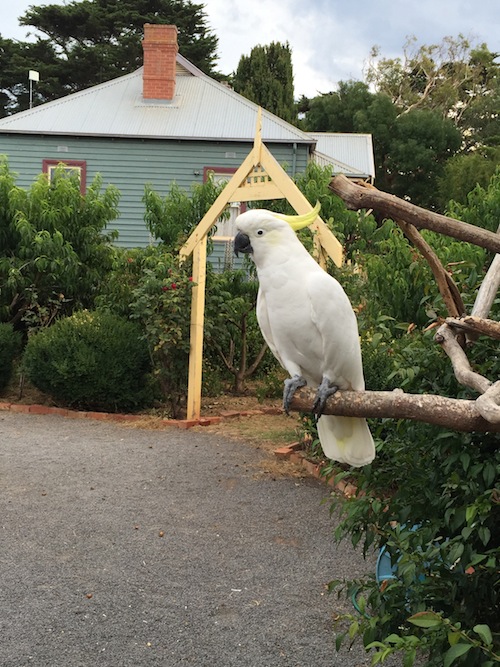 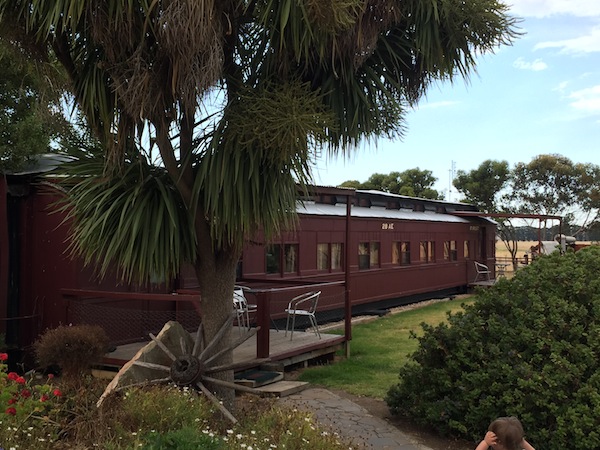 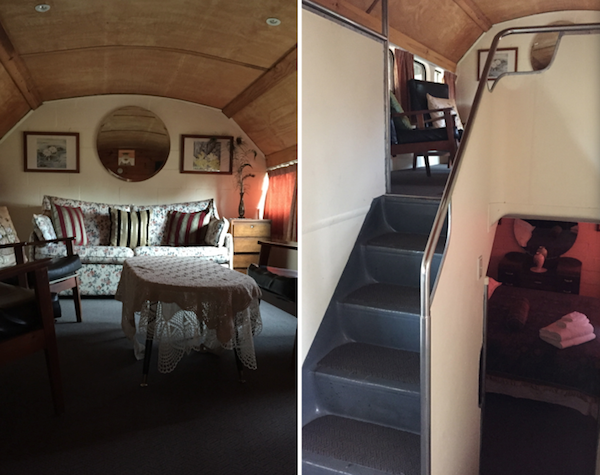 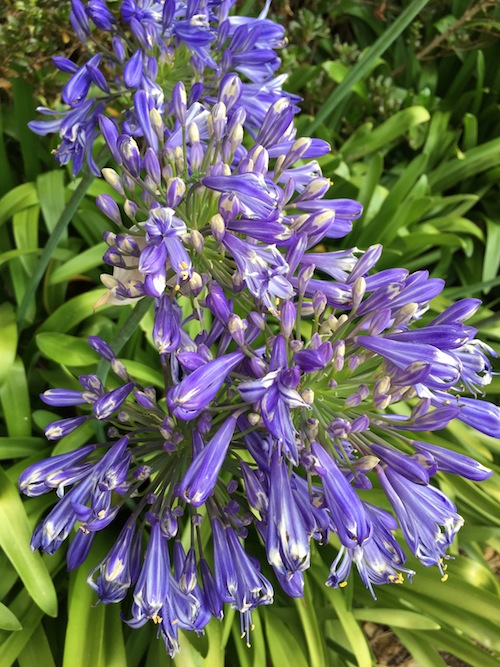 The alpacas weren’t the only animals around.  They had a few lazy cats, some dogs, and some beehives. We visited the little ponies and they seemed to have sheep too. A proud peacock was walking around like he owned the place, but the man in charge is their cockatoo named, surprise surprise, Cockie. He was born near Hamilton in 2000, but fell out of his nest and was abandoned during a storm. A kind farmer found him and brought him here. As far as he is concerned he is human, and a young human at that as he will live for another 80 to 90 more years. He isn’t a big fan of children any more, but loves adults and if you aren’t careful he will jump on your arm (the owners joke that it is free to put him on your arm but it costs $25 for them to come out and get him off your arm…that is the tough part) as Rich discovered ……

Cockie sits near the little house where the owners serve food and coffee and where I had my hot chocolate. The menu says Belgium chocolate hot chocolate, but to my taste this was very clearly a Cadbury cocoa mix with warm milk ($4). It wasn’t great, and I don’t think I’d recommend it, but I would recommend staying on the property if you want to try something a little bit different and want to get away from it all.

There are three side trips you need to do from here, two very close by and one a little further away. The first of these we did just before sunset, which was to drive 10 minutes to Yambuk Lake situated on the coast. As you approach Yambuk Lake, at the end of the road you will come across acaravan park –  keep driving through it, and park at the end of the road. Walk up the sand dune, and you will find yourself looking over a stunning beach which was almost completely deserted when we arrived. We couldn’t believe our luck when a pod of dolphins were playing in the waves just as the sun set. It doesn’t get much better than that! 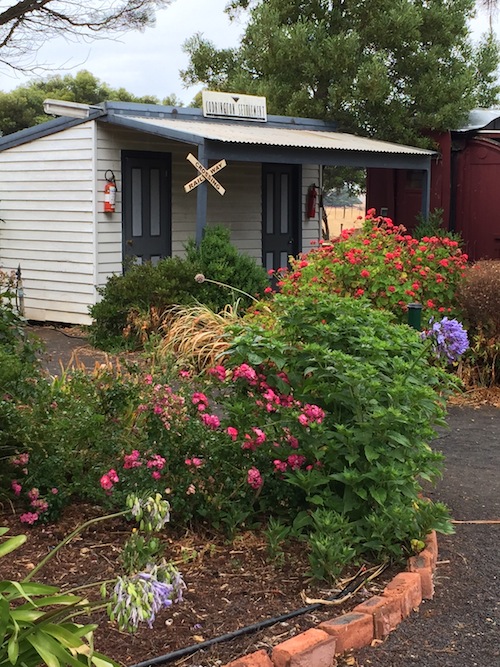 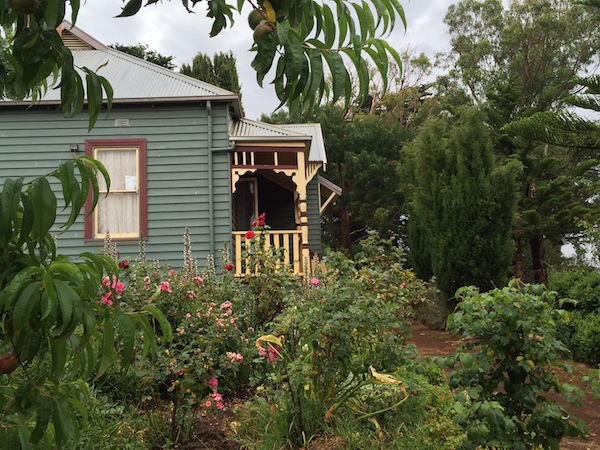 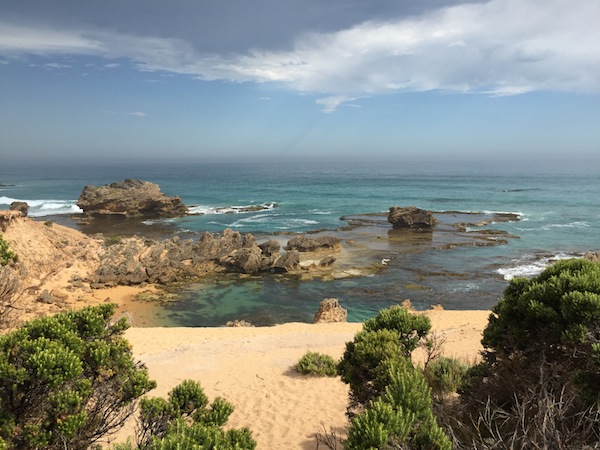 We did another side trip first thing in the morning, when we visited the Crags, only a seven minute drive away, with a spectacular view of the rugged coastline. It’s known as the shipwreck coastline, due to the number of sailing ships that wrecked along here during the 1800’s, and it’s easy to see why.   We did the last side trip on our way back to Melbourne, with a stop at the Tower Hill Wildlife Reserve. This Reserve is an dormant volcanic crater (4km wide) filled with wildlife, which last erupted about 25,000 years ago. You can just drive through the Reserve (takes 10 minutes) or stop and do one of its many short walks. You are pretty much guaranteed to see emus walking around, a koala or two up in the trees, kangaroos bouncing around and if you come at dusk you have even more chances to see some of the lesser known Aussie animals such as the echidnas and possums as many are nocturnal. 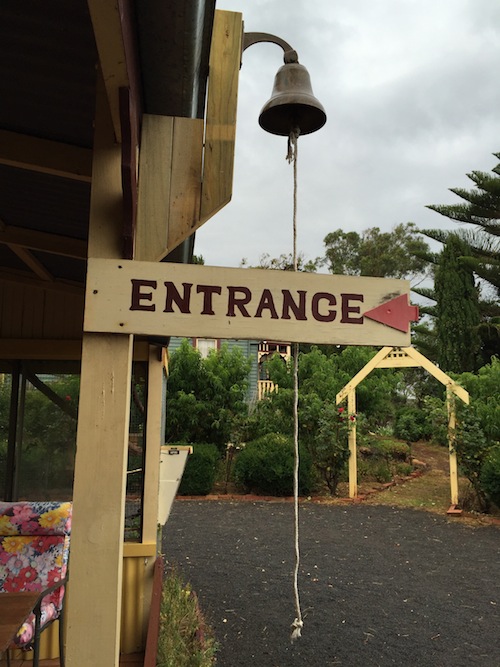