A Walk around DUMBO and a Hot Chocolate at Jacques Torres, New York City, USA 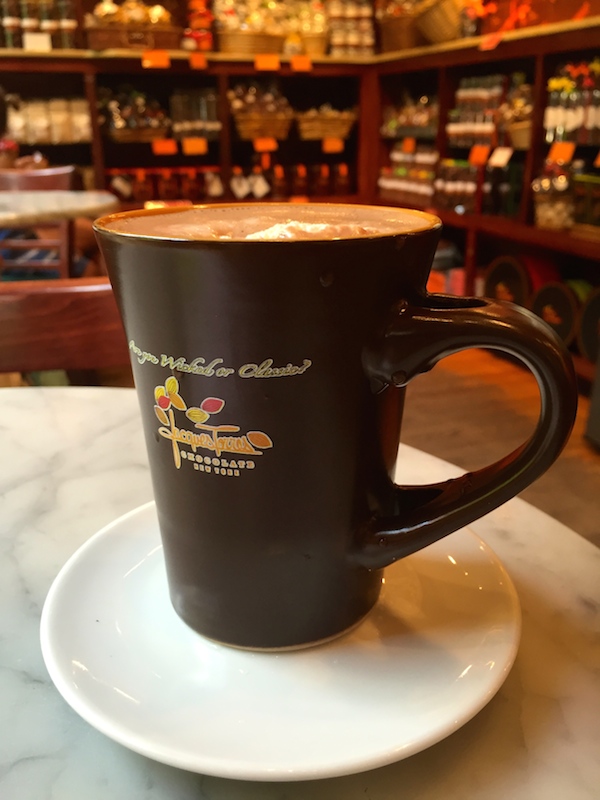 I have been to New York many many times, but have never crossed the river over to Brooklyn before. Partly it is because I never really have enough time or am usually busy enough just exploring Manhattan. But a part of it is because I always wondered whether it was safe or if there is anything really worth visiting over there…or even how to get there in the first place. This time, I decided to change things and made it a priority to spend my free time exploring Brooklyn. My first night in New York City I walked across the Brooklyn Bridge at sunset, a stunning walk where I was surrounded by hundreds of other tourists and some locals. On the other side I took the subway and came back right away. The next day I had a little bit more time so I took the subway directly across and spend several hours exploring DUMBO.

DUMBO, or Down Under the Manhattan Bridge Overpass, is an area that has been under, and is still under, a lot of transformation. Warehouses have been cleaned up and transformed into an interesting mix of independent shops. My first stop was, obviously, Jacques Torres who opened his first chocolate shop in New York here in 2000. 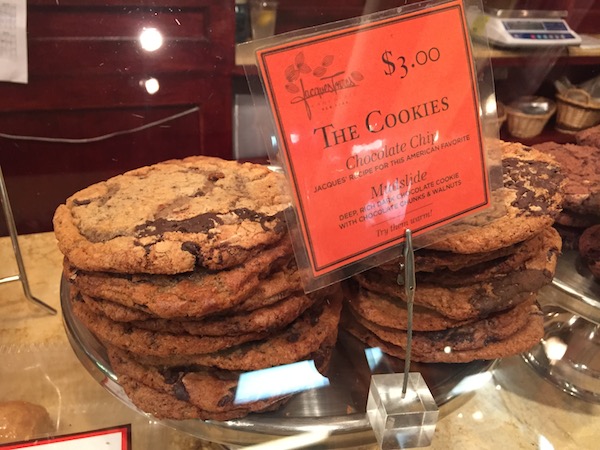 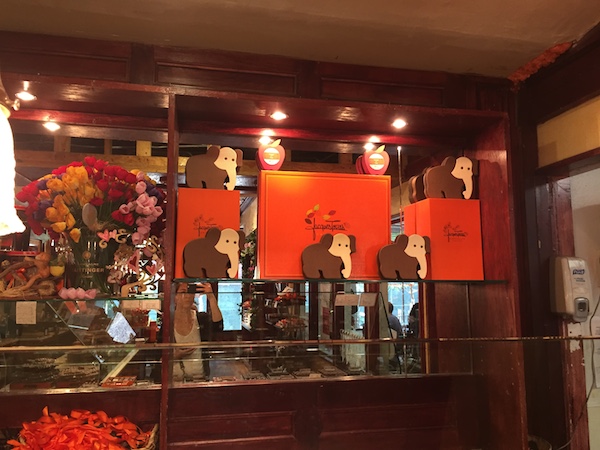 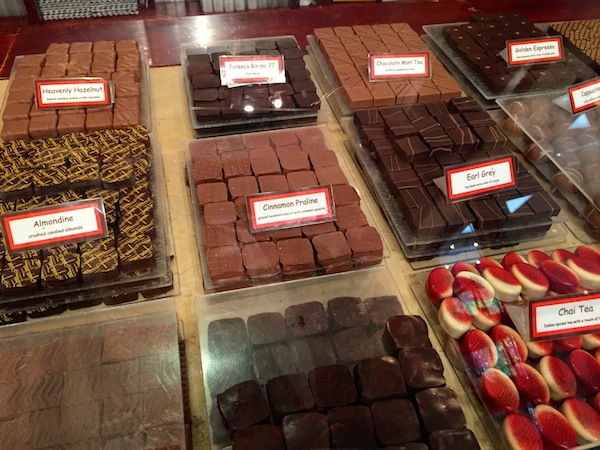 Jaques Torres was the youngest pastry chef in history to earn the prestigious Meilleur Ouvrier de France (Best Craftsman in France) medal for pastry which he received in 1986. This is given to only a very select number of chefs and means he can wear the French tricolours on the collar of his chef whites. Referred to as Mr. Chocolate, he has taken over New York City and not only has several chocolate shops across the city but also a range of popular chocolate books and television shows shown on national TV.

Today Jacques Torres was absolutely full but every single person there was waiting for ice cream or another very tempting treat they specialize in, ice cream cookies with a generous scoop of any of their ice cream squeezed between two very decadent looking chocolate chip cookies. I bucked the trend, and ordered a hot chocolate. They had two options. Their wicked hot chocolate is 60-70% dark chocolate, milk and a mix of spices that includes allspice, cinnamon, ground ancho chili peppers, and smoked ground chipotle chili peppers. The woman there recommended I try their classic, 60-70% dark chocolate with milk, and it was very good. The shop has a number of small tables right along the window with a view of not just DUMBO but all of Jacques Torres delicious looking chocolates. 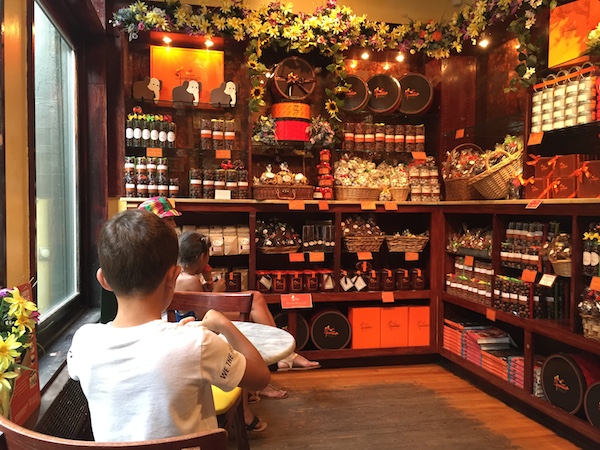 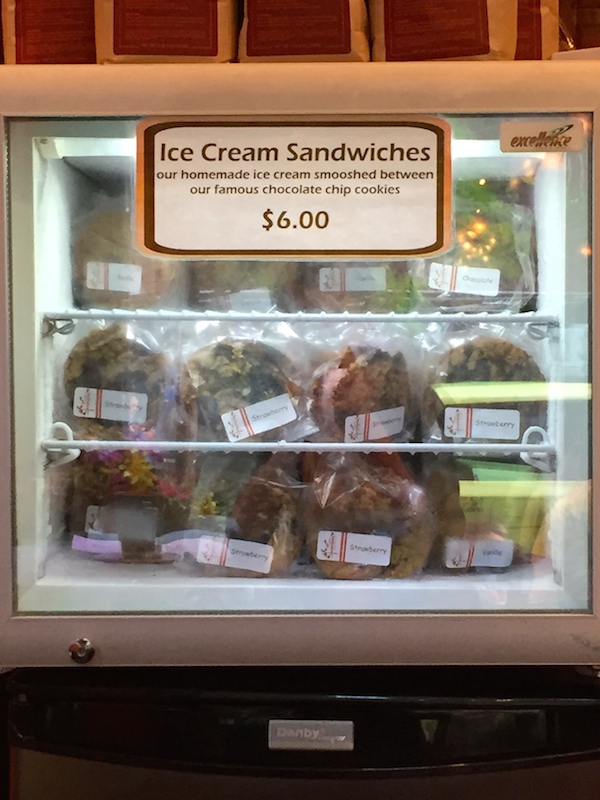 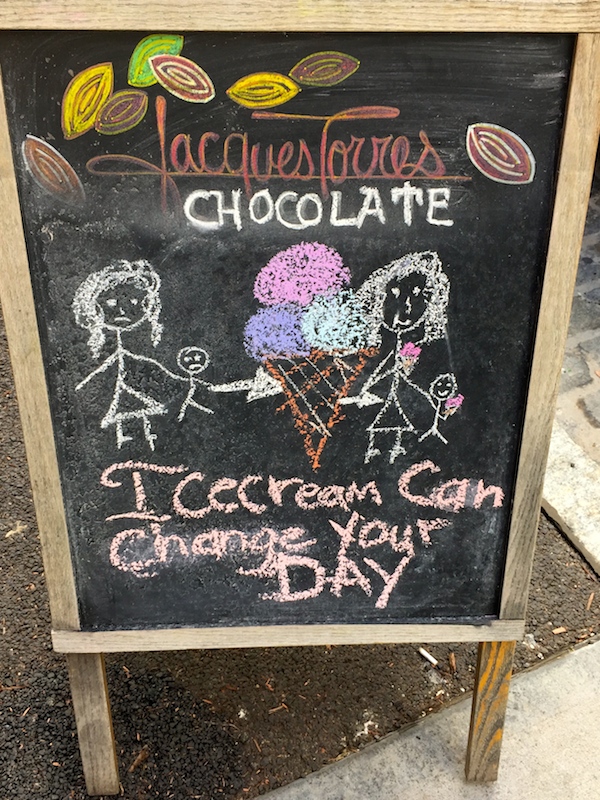 Just across the street is Amandine, a decadent bakery with a beautiful selection of pastries (including a croissant that has both almond paste and chocolate inside, how good is that!). Not much further away there is Broklyn’s Ice Cream Factory and One Girl Cookies, while for dinner, a New Yorker brought me to have New York Pizza. Grimaldi is the well known pizza spot on this side of the river, but we ended up at Juliana’s which also had great pizza. To burn off all of this goodness you can take a walk along the river which is dotted with interactive art installations. At sunset the park along the water is filled with locals and tourists, many of whom arrive with picnic boxes and set up for dinner while watching the sunset over lower Manhattan. Further down the path the old Piers have been transformed into a sports mecca with an ice skating rink, basketball and handball courts and a range of daily yoga and meditation classes open to all. There is even an old fashion carrousel with 48 carved horses. I am now a big fan of Brooklyn and am looking forward to making this little side trip everytime I’m in New York City from now on. 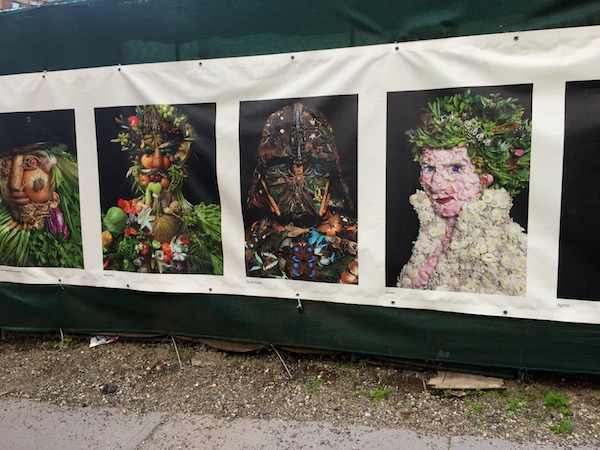 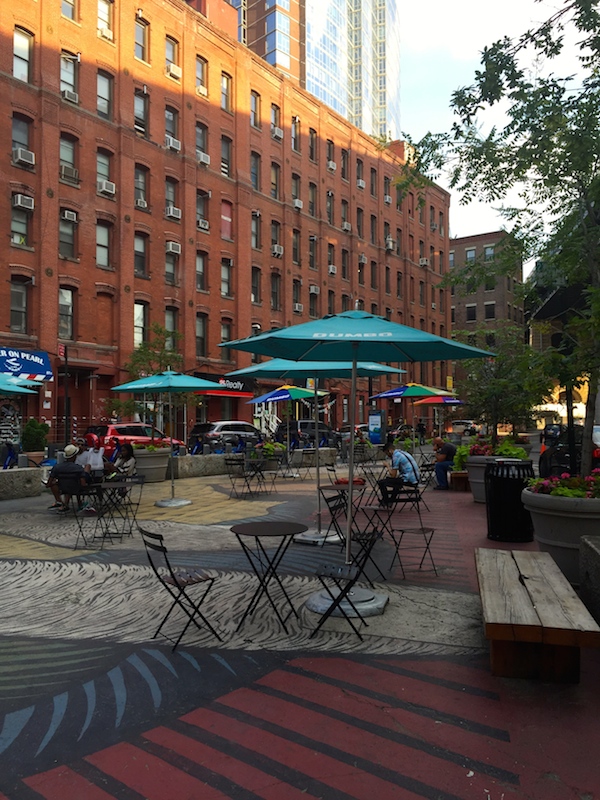 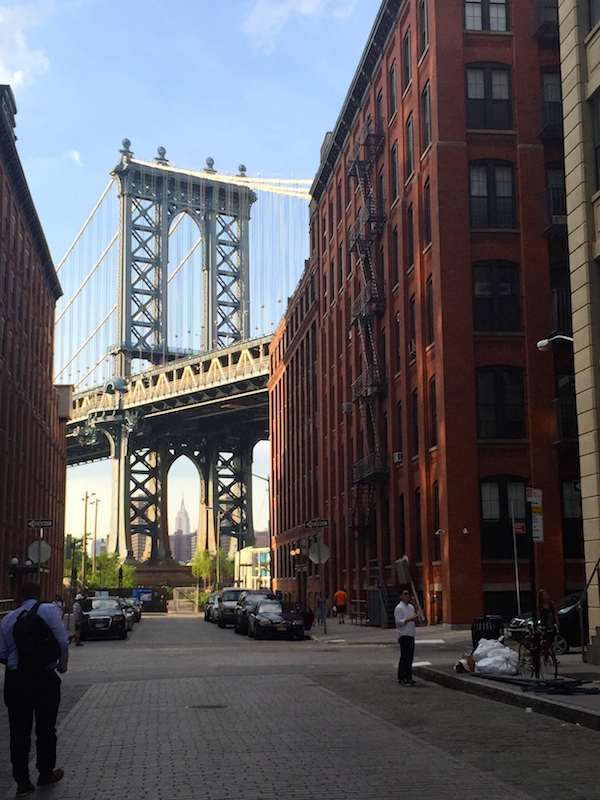 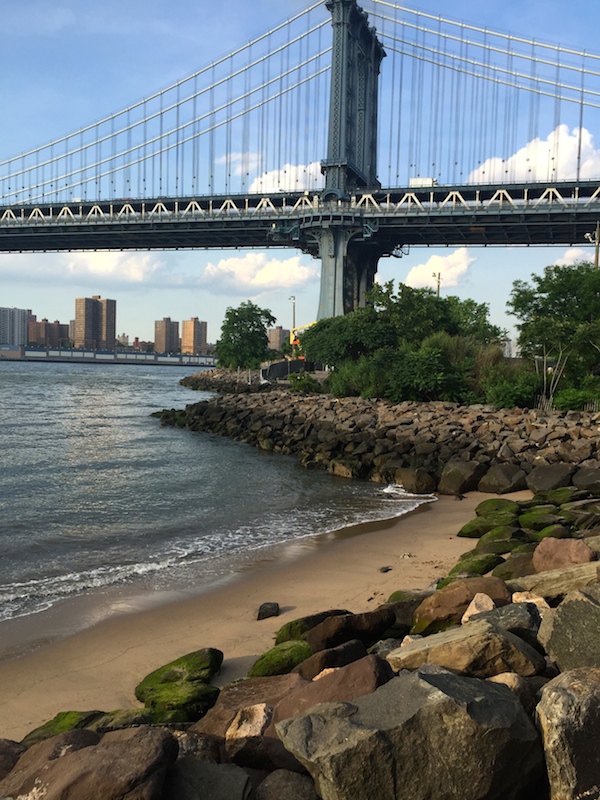 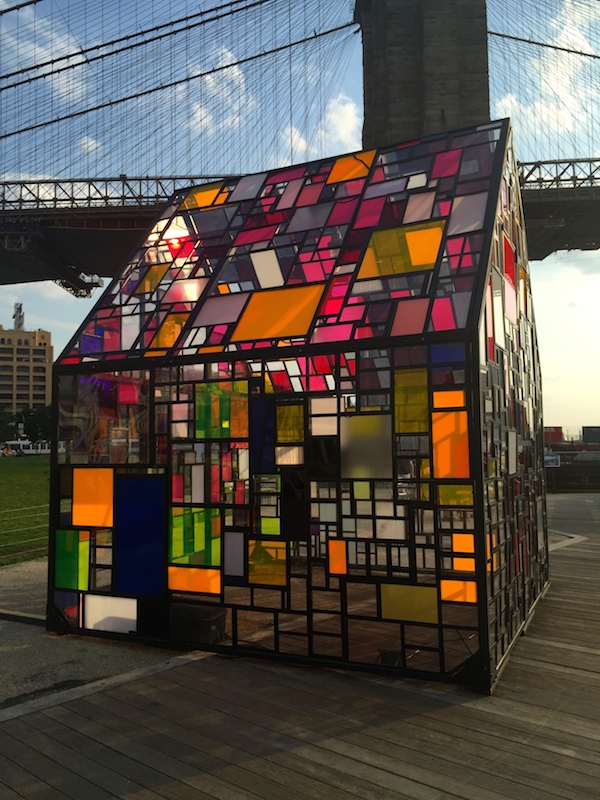 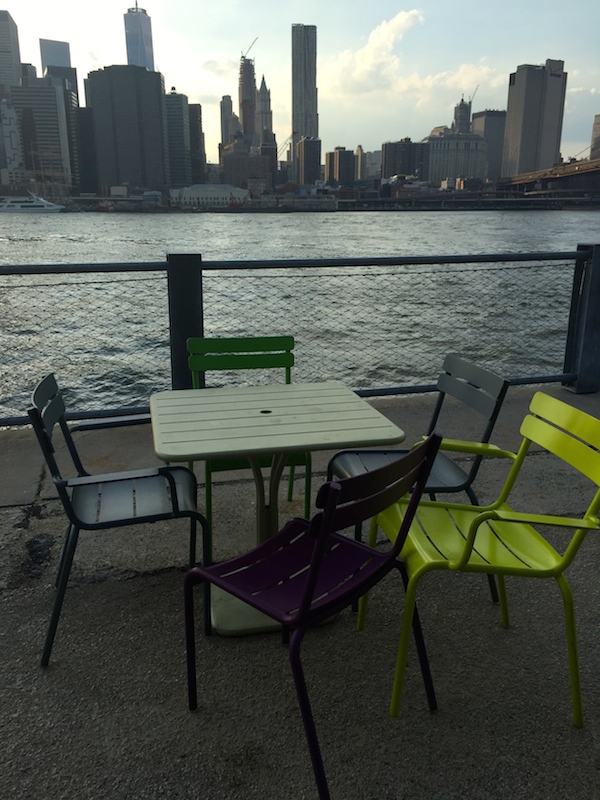 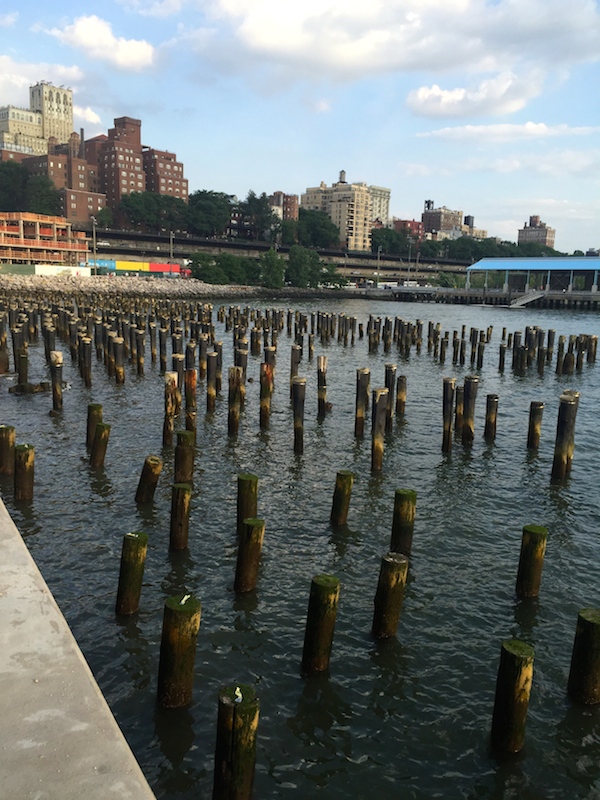 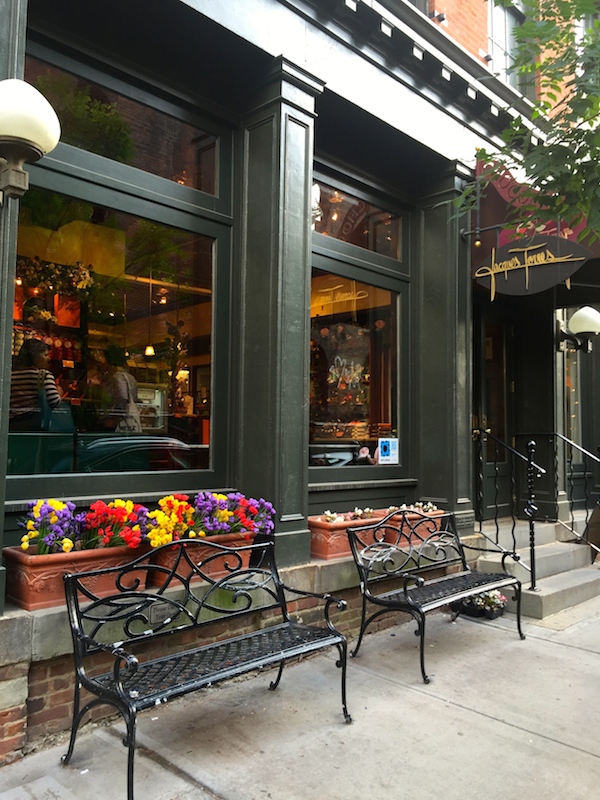 Verdict: Not surprisingly they have a beautiful hot chocolate. Next time though I need to try one of those ice cream cookies and take it on my walk along the water during sunset. Jacques Torres, 66 Water Street, Brooklyn, New York City, USA