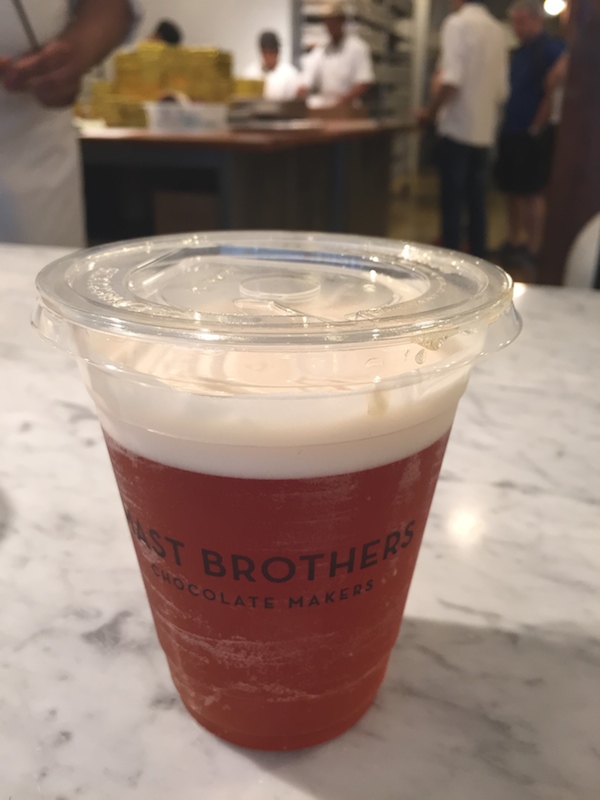 The Mast Brothers, Richard and Michael, started off making chocolate bean to bar in their apartment in New York. They would lug up bags of beans from the street level, and used home made machines to create their chocolate. Apparently these machines were very noisy and they got a lot of complaints from neighbours (I’m assuming that a free sample of chocolate to a complaining neighbour was all that was needed to solve that problem!)

I have been wanting to visit Mast Brothers for months now, and finally had my chance today. They have quite a mixed reputation. On one hand they are a very popular bean to bar chocolate maker with a hip and fun brand. On the other, chocolate experts sometimes contend that their product is low quality. But once in the store you easily enter their world and fall in love with their approach to all things chocolate. And as for quality, I’ve had a lot of chocolate (as you can imagine) and loved their unique and innovative approach. Tasted pretty damn good to me! 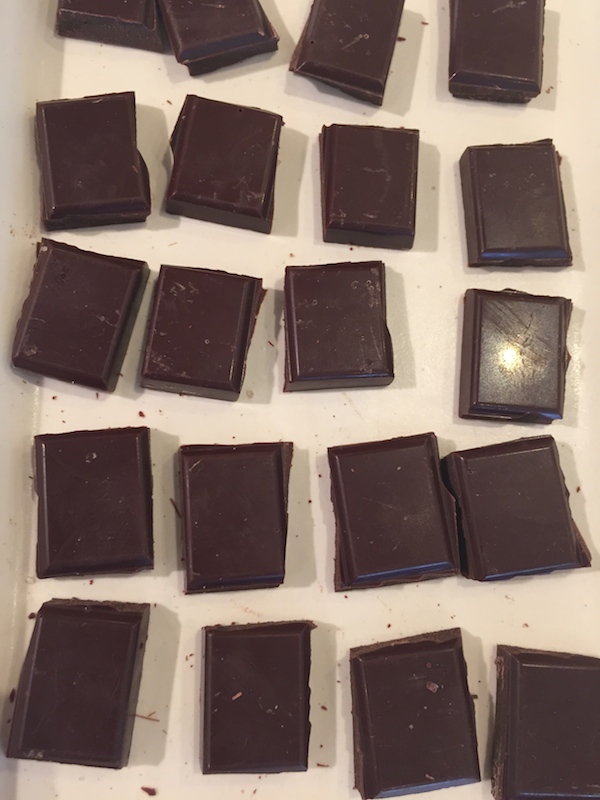 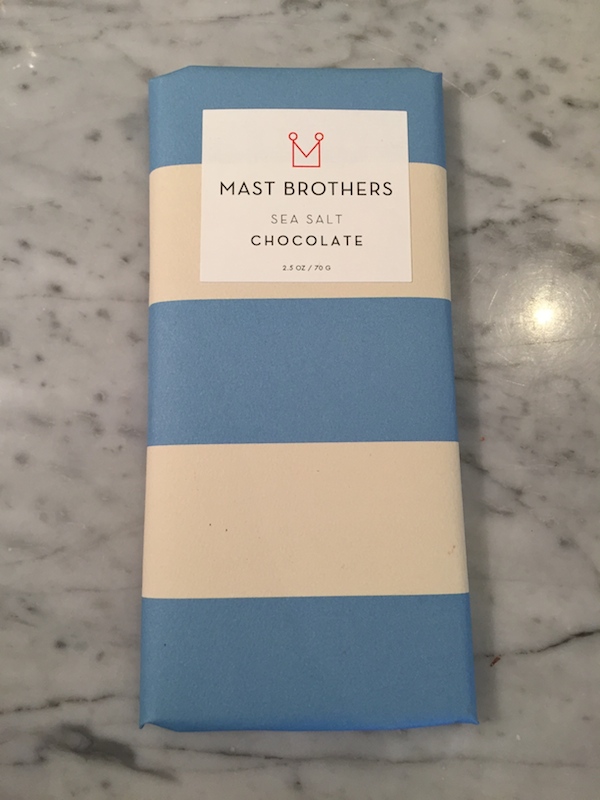 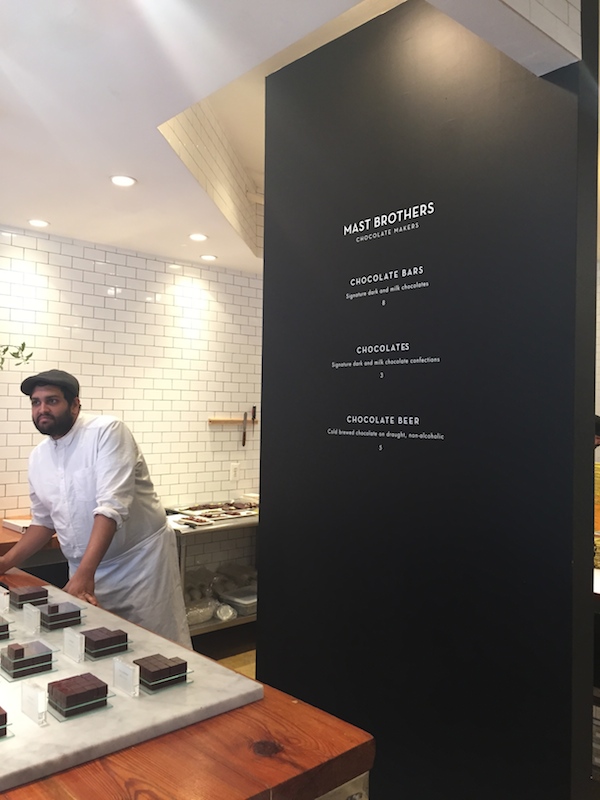 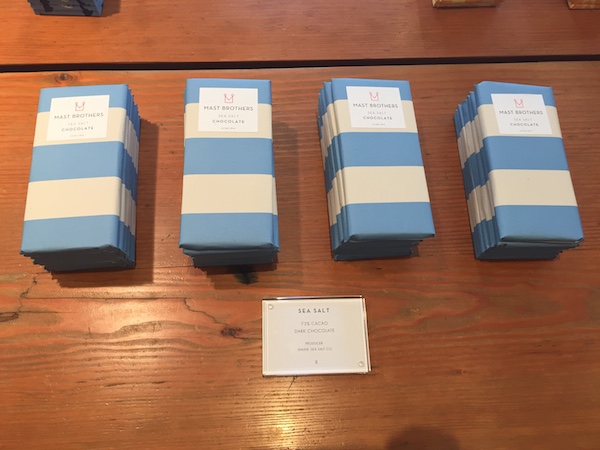 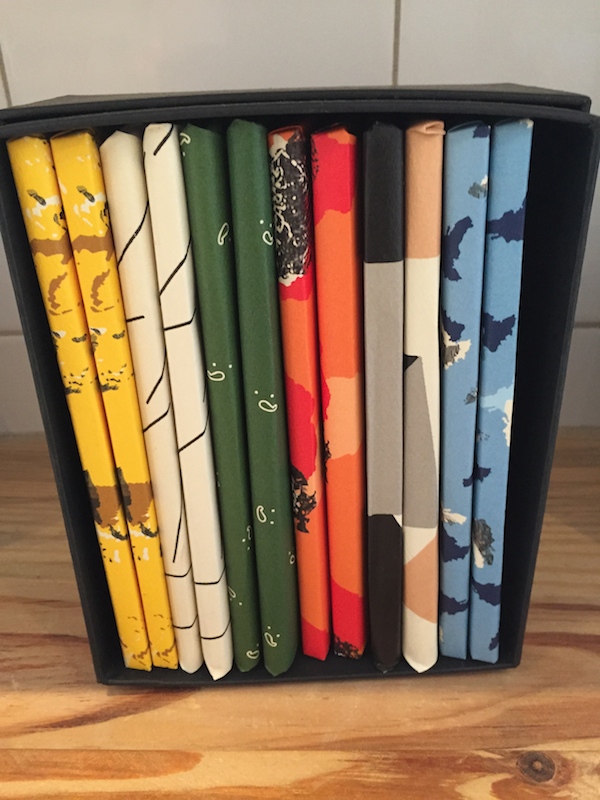 They have two spaces on the same street. One is an event space that also serves a range of drinks including hot chocolate. Unfortunately this space was closed when I was there, as it’s only open on weekends. Their other, main space is where they create and sell their chocolate jewels. You walk into a large, open space with brick walls painted white and pallets covered in bags of cocoa beans along one wall, all with signs stating the country they originated from. In the middle of the room towards the front door is one single large rectangular table where they have displayed 5 of each of their 8 or so flavours of chocolate bars on offer.

For 10 dollars you can take a 20 minute tour of the facility and tours start every hour on the hour, so of course I just had to take one. The space behind the counter, which is all open, is where they create their chocolate. First they take the cocoa beans and clean them/sort them before roasting them. The roasted beans go through a home made contraption that looks like it was made with pieces of a vacuum cleaner to separate the husk from the cocoa nib. The beans need to go through the machine a few time to really get them clean. All the husks are either brought to a local farm where they are used as mulch, or to a local whisky distillery where they use them to infuse a chocolately flavor into one of their brands of whisky. 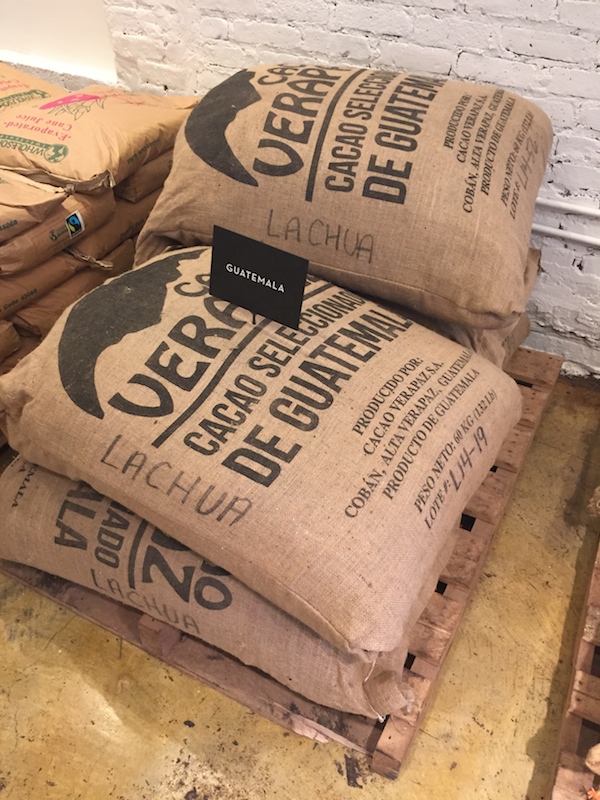 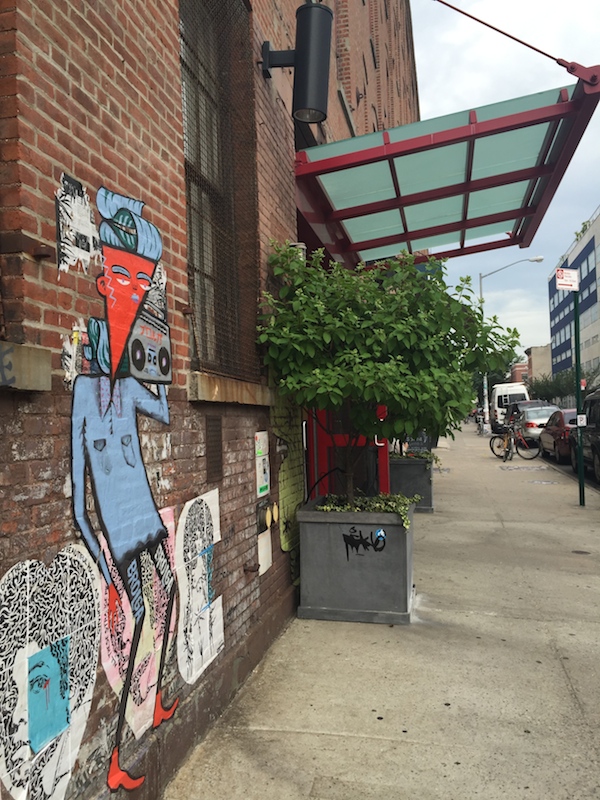 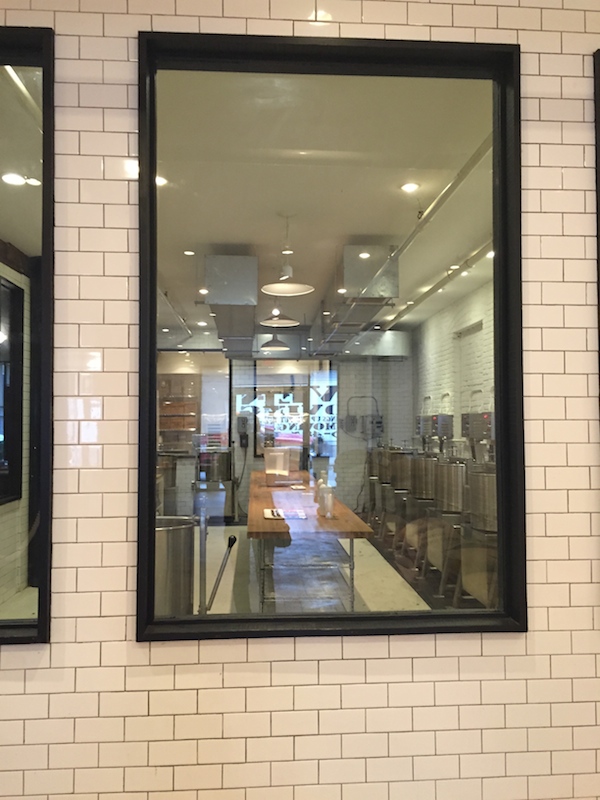 Next step is the conching room where 10 different machines are set up. The chocolate goes through the rocks in these machines for 24 hours to make them not only liquid but nice and smooth. The smell of the chocolate from Papua New Guinea currently in the machine was intoxicating even though it had only been in the machine for a couple of hours. I was able to taste some, and the texture was still quite gritty on the tongue but the flavor was magical. Without the sugar you can really taste the subtle flavours that chocolate from Papua New Guinea are known for. Another machine has some more chocolate from PNG but this batch has been going for 24 hours and already has sugar added. When the chocolate is ready it is placed in a large restaurant pan and left to solidify after which it is wrapped and stored for around a month to really let the different flavours develop. Chocolate from different countries, even from different parts of countries has very unique flavor profiles and this process lets these really shine.

Next step is to temper the chocolate. This involves melting it to very specific temperatures. When it solidifies again the result is a very shiny chocolate that snaps when you break it. From here the chocolate may become one of their chocolate bars, or a bonbon, or bulk chocolate that they sell to a wide range of restaurants in New York City. 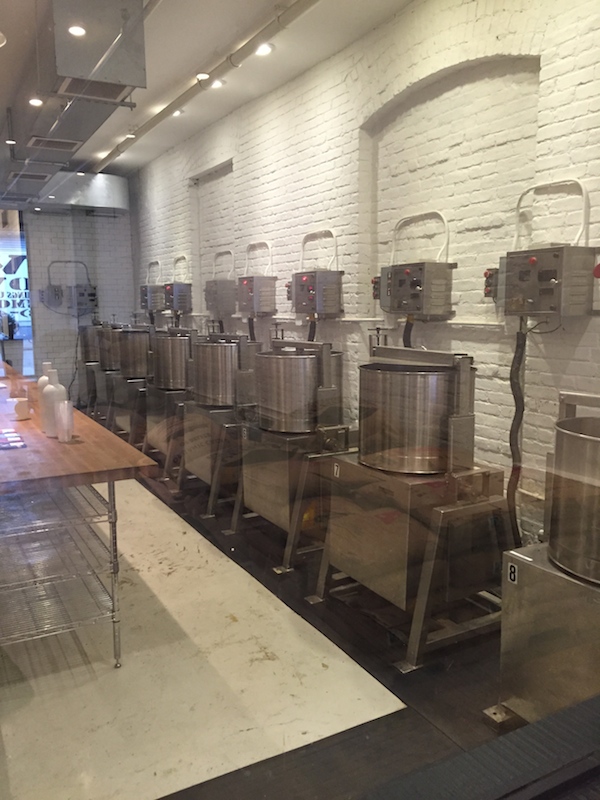 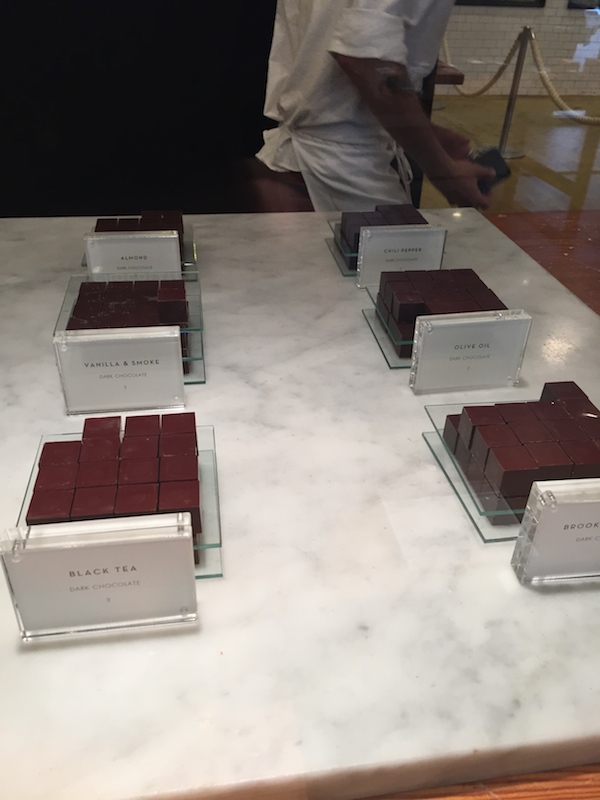 I tasted several of their bars. The bar from Madagascar was very fruity with strong citrus notes while the bar from the Dominican Republic was deeper, with notes of tobacco. Most of their chocolate is dark chocolate, but they do also have three milk chocolate bars, one using goat’s milk, one sheep and one cows. I tried their goat’s milk chocolate which had this beautiful taste, almost like goat cheese and chocolate. I also tried their bonbons. The toasted milk one is very nice.

Unfortunately at this location they do not serve hot chocolate. About to leave disappointed, I noticed that they do serve chocolate beer however. To make this concoction, they soak the cocoa nibs in water overnight and then strain them. A small amount of simple syrup is added to the mix and then nitrogen to give it the characteristics of beer, that distinctive color, the foamy finish on the top and the fizzy feel on the tongue when you taste it. But this ‘beer’ is non alcoholic and at first taste feels and tastes remarkably like beer! You taste the chocolate but not enough that it overpowers. It is beautiful balanced and such an innovative idea, not to mention perfect for a hot summer’s day. 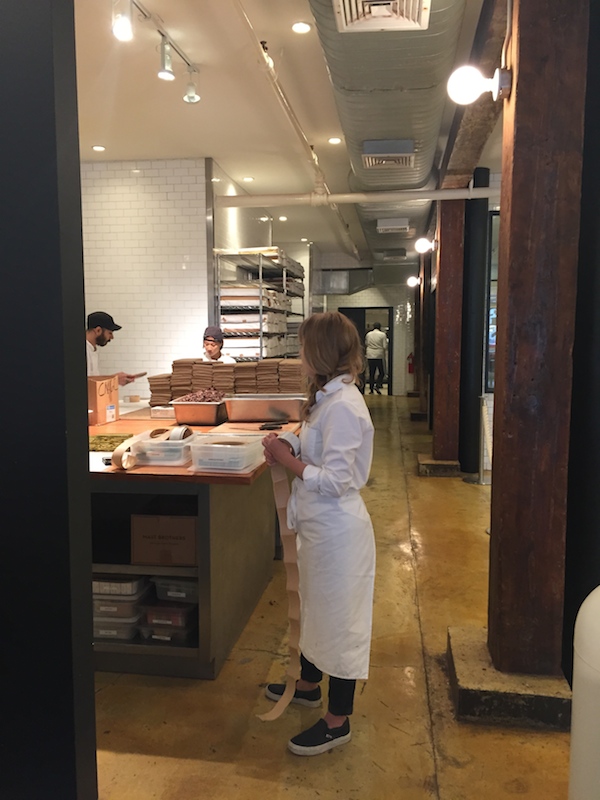 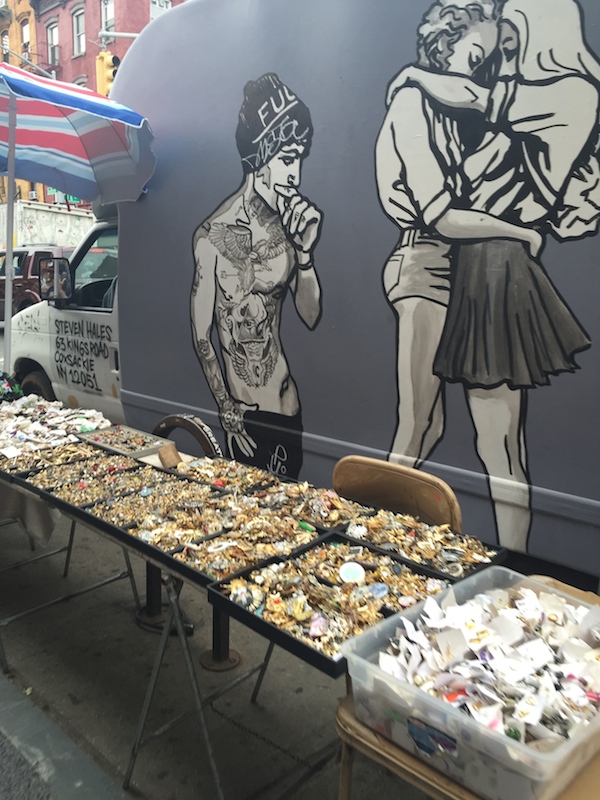 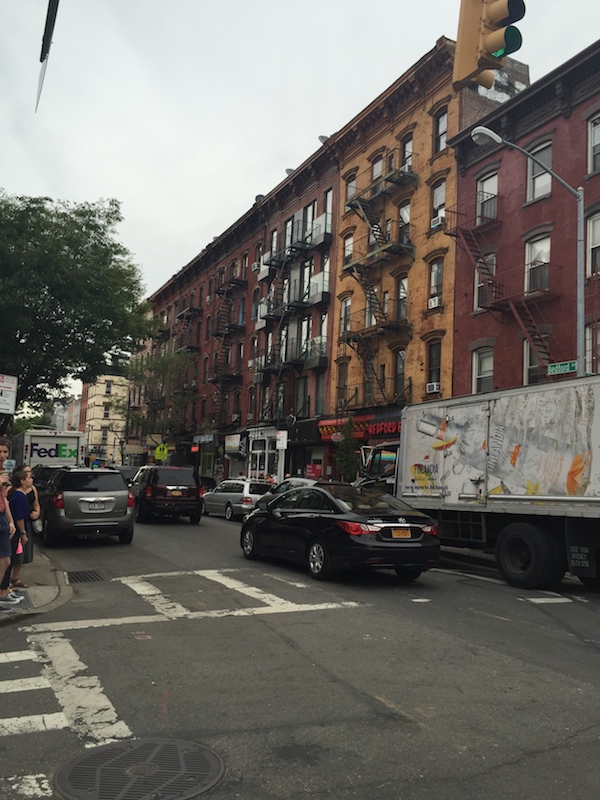 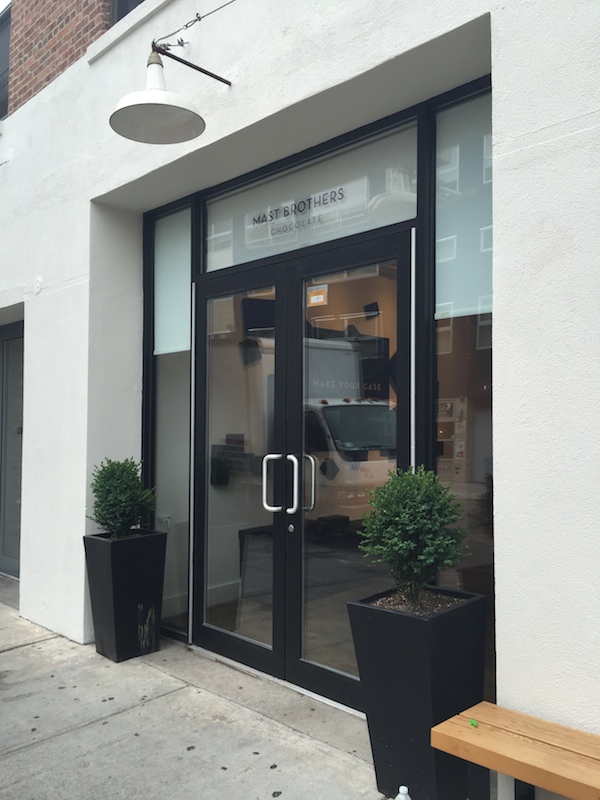 Verdict: Mast Brothers is smart because anyone who goes through their store and does their tour will obviously become a fan. The chocolate beer is fantastic and I am very much looking forward to returning to try out their hot chocolate. Apparently they use half a bar of chocolate for each hot chocolate. Something I need to try. Mast Brothers, 111 North 3rd Street, Brooklyn, New York City, USA