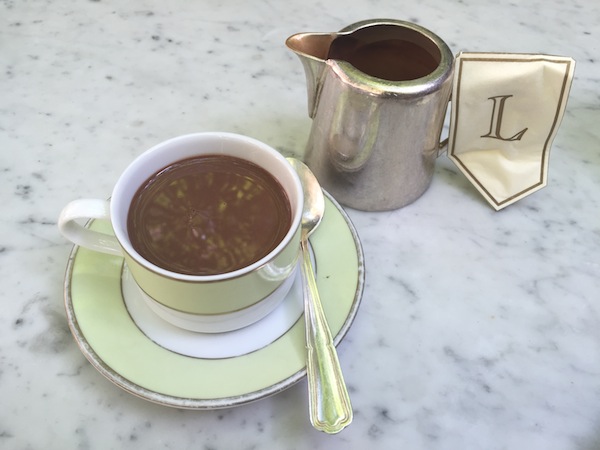 When I lived in France of course I knew of LaDuree. It is a French institution, the home of the multicoloured macaroon. I visited LaDuree once in Paris, just a few weeks after I first arrived and never returned again. The macaroons were nice (but not the best you can get in Paris), definitely some of the most expensive, the atmosphere was great, but it was a tourist magnet. When you live in Paris you quickly get tired of all of the tourists and make a point to not go into those areas where they predictably are found. So LaDuree became a tourist trap in my eyes, and I never returned.

In New York City it is a completely different story. Right in the middle of trendy Soho, the signature pale green front entrance of LaDuree does not even hint at the magic that lies inside. Through the front doors the first area is where the macaroons are sold. Made in France and flown over , you can get them in every combination imaginable; coffee, chocolate and vanilla, but also rose petal, earl grey, cherry blossom and a mysterious blue macaroon called Marie Antoinette which, based on her reputation, must be fabulous. If you aren’t in the mood for macaroons, their selection of desserts are equal parts of elaborate, beautiful and decadent. They looks like works of art, every one of them, and just looking at them you can completely believe that that piece of chocolate hazelnut millefeuille would be worth $7, maybe even a bargain at $7. Visitors buy the macaroons by the box and carry them away. 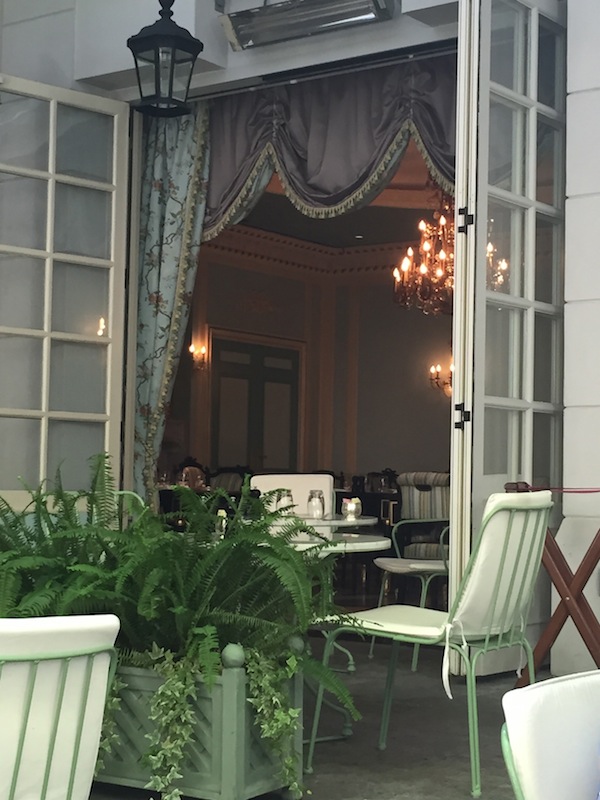 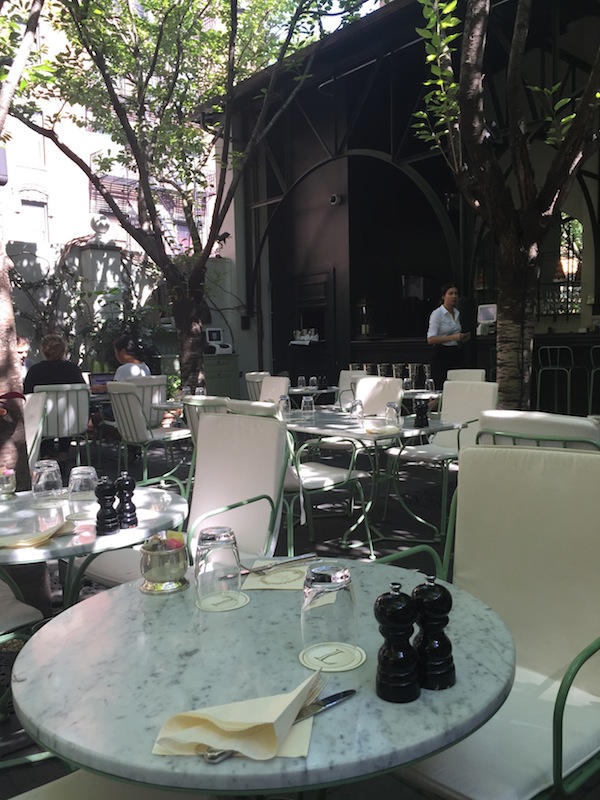 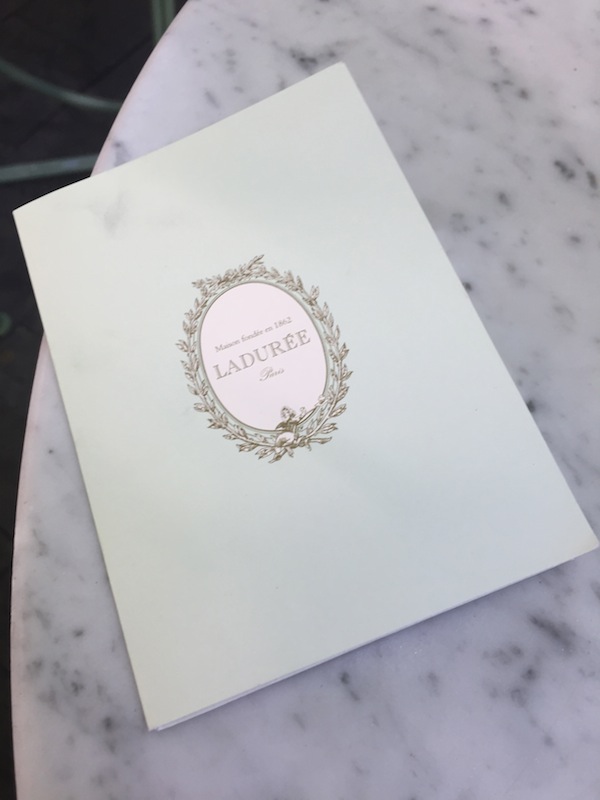 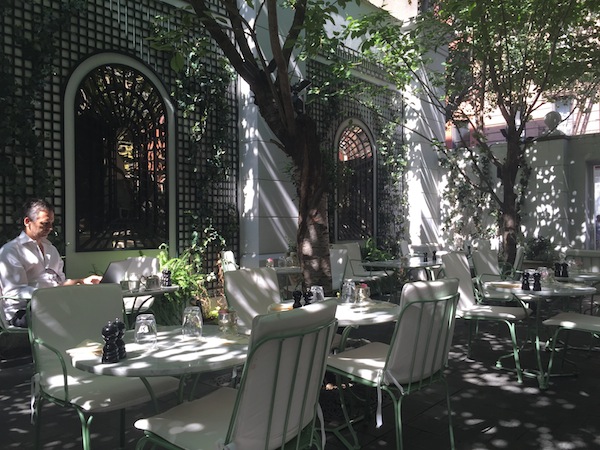 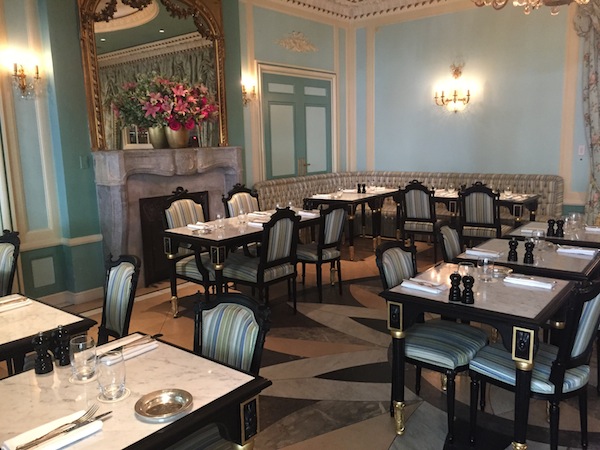 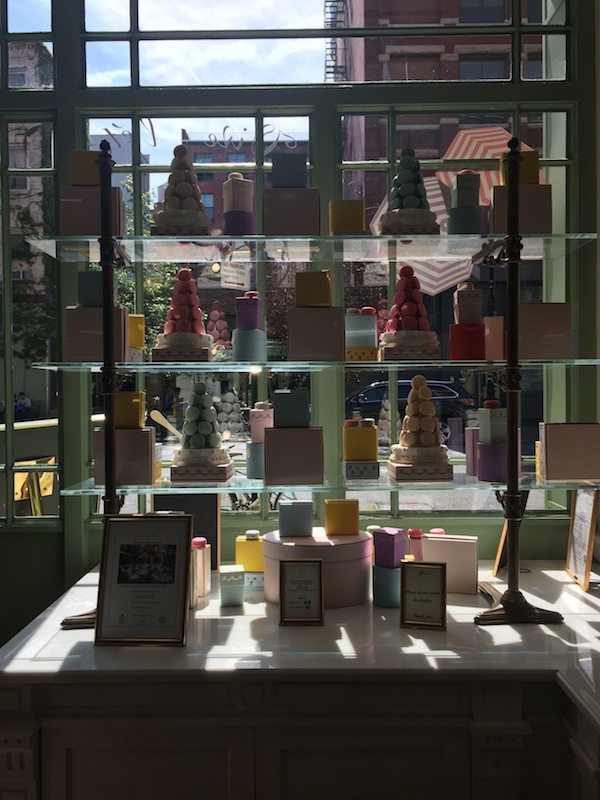 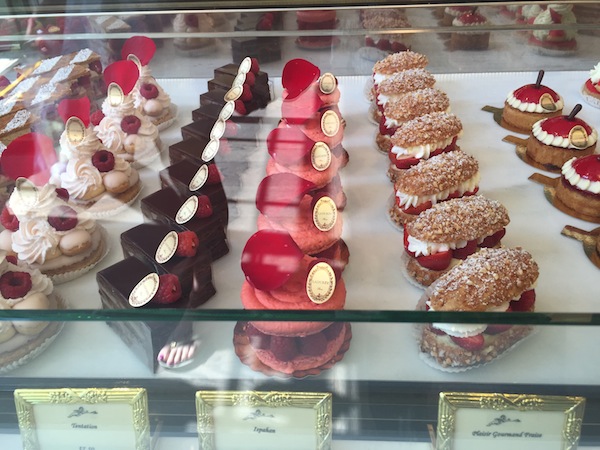 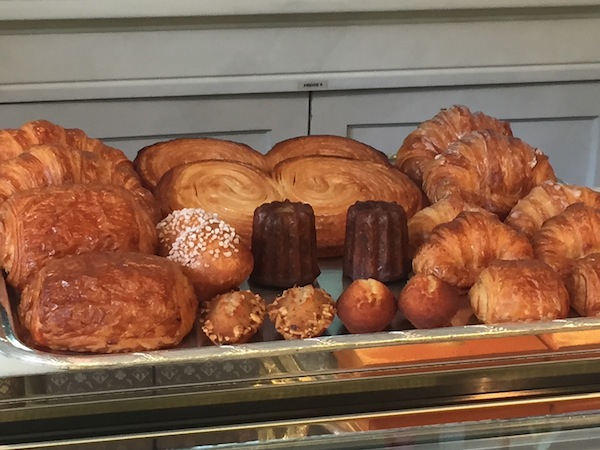 But skip this line and venture forth into the heart of Laduree. Someone with a hint of a French accent dressed in a black skirt/pants and crisp but relaxed white shirt (both seemingly requirements for working here) will guide you through Laduree’s French chateau and you will instantly feel that you may be in some recreation of the Palace of Versaille or Fontainbleau. The first room is painted Laduree green with wooden panels and navy blue sofas, making it a perfect looking room for a digestif in the evening (port and macaroons…count me in). The second room is baby blue with subtle and some not so subtle gold accents such as the immense chandelier dangling from the ceiling. Thick soft purple curtains frame the door that brings you into eden, a large terrace covered by the canopy made by 9 beautiful trees so that everyone has shade. The tables are all white marble and the chairs all Laduree green. This is your palace paradise for as long as you want to stay here, and there is no rush and no feeling of being rushed. So start eating. The breakfast crowd here is eating a mixture of American classics such as eggs and bacon, and French breakfast classics such as baguettes and croissants with butter and jam. Others have skipped all this and gone straight to the desserts, tasting a selection of their multicoloured desserts.

If you like hot chocolate, this must be on your list. Mine was beautiful. It arrived in a small metal pot filled with enough chocolate to fill your delicate gold, white and green ceramic cup twice. It was beautiful, unlike any hot chocolate I have had in NYC or in the US generally, a hot chocolate that would qualify as a beautiful hot chocolate in France too, a country filed with above average options. It was smooth and decadent but light and sophisticated, just like everything else they sell on the pastry side.. A treat in every sense of the word.

The magic doesn’t stop there either. Leave the comforts of this sweet palace and you will find yourself in the heart of Soho where you will easily find lots of other treats to spend all your dollars on. 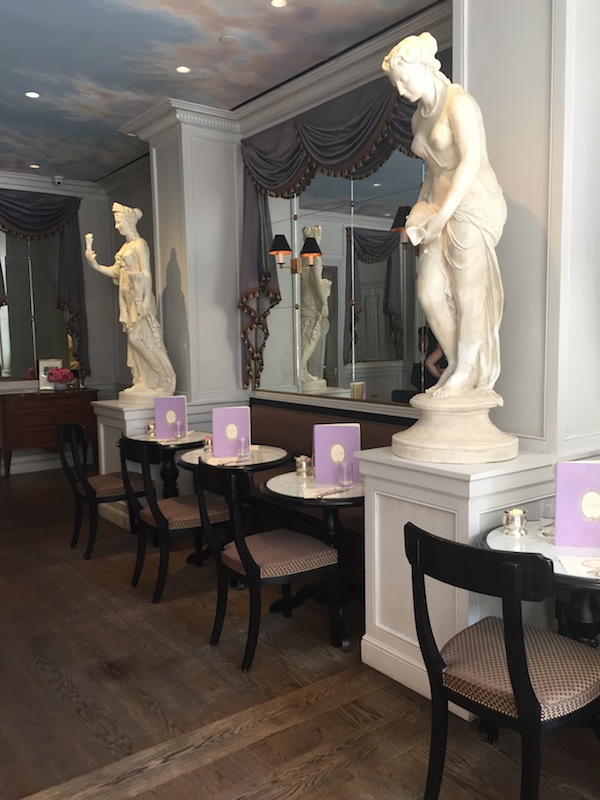 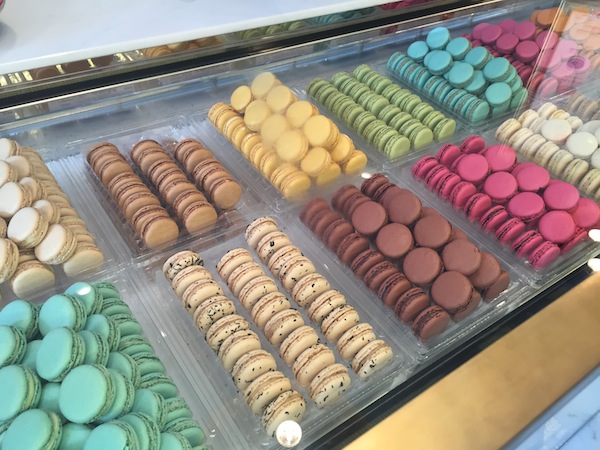 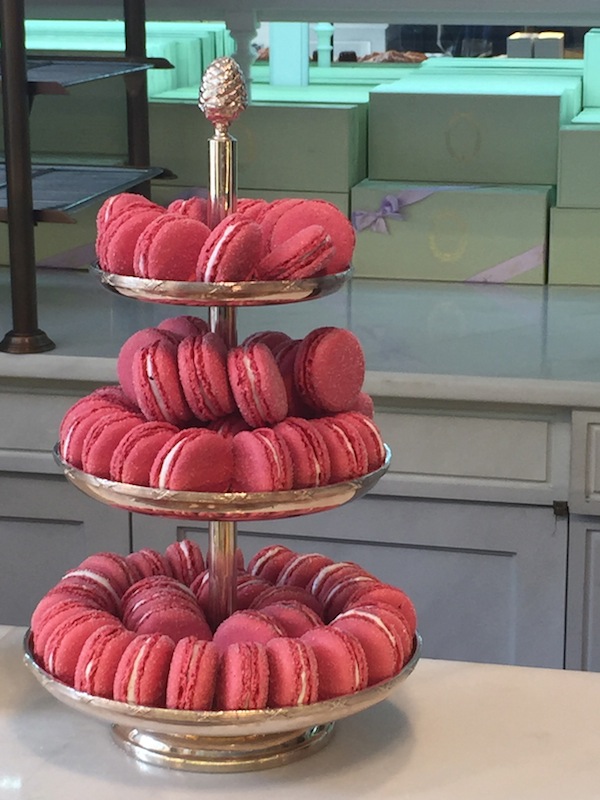 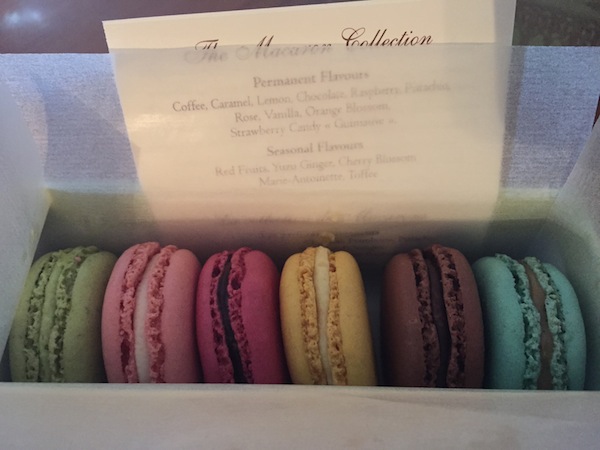 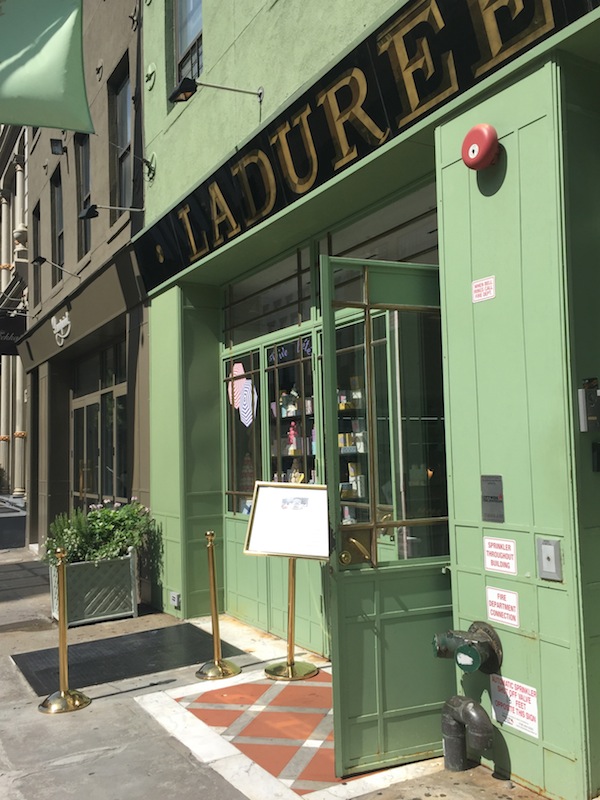 Verdict: Six dollars for happiness…worth every penny….and so were all the other delicious bits I got tempted by (a pain au chocolate and a macaroon). They also serve a variety of breakfast, lunch and dinner options. I’m likely to move into this Palace next time I’m in New York City. (Price: $6) Laduree, 398 West Broadway, Soho, New York, USA