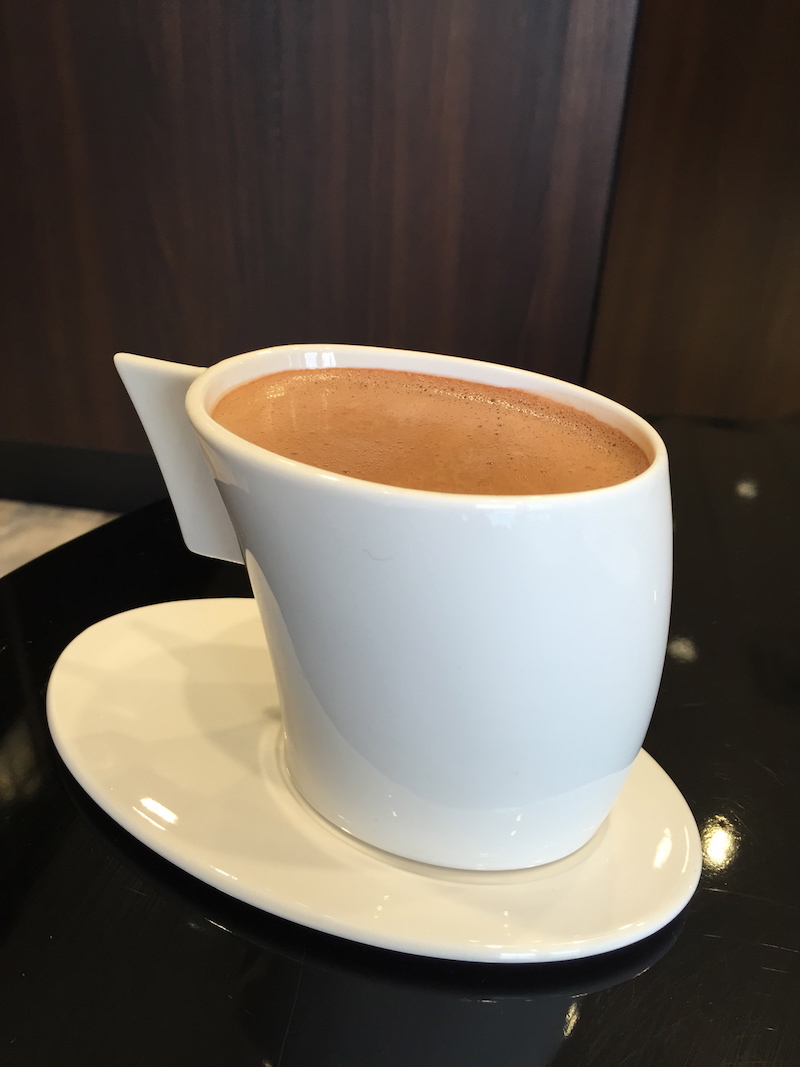 That is until now. Now Houstonians have Cocao & Cardamon. From now on, I will remember Houston as one of the cities I have visited around the world that has a beautiful hot chocolate offering. Located in the middle of the shopping craziness that is the Galleria area, in a non-descript but extremely popular shopping area, you would easily miss it if you weren’t looking for it.

While the outside of the store blends in with the surrounding shops, the inside is nothing, nothing like the outside. It incredibly inviting, bright and modern. As we walked in, a young woman was enthusiastically serving a customer who was interested in buying boxes of Cocoa & Cardamon’s signature chocolates. The chocolates are truly works of art, moulded into unique and intricate shapes and then painted in a dizzying array of punchy colours. The flavour combinations pack as much punch as the decoration. We were tempted by the Five Spice Praline, a hazelnut praline with a blend of spices based on the Chinese philosophy of balancing yin and yang, and the Coco Curry, a smooth butter ganache with cream of coconut laced with turmeric, coriander, cumin and cayenne. For some good old southern comfort we almost chose the Smores, homemade roasted marshmallow layered with milk chocolate ganache and rolled in graham cracker crumbs, or the Strawberry Bubblegum, strawberries blended with a white chocolate ganache infused with Hubba Bubba’s bubblegum. We finally settled on the Guava Tamarind in white chocolate ganache, the Cardamon Rose, a creamy white chocolate ganache infused with cardamom and finished with a touch of rose water, and a basil and lemongrass truffle, all fantastic. 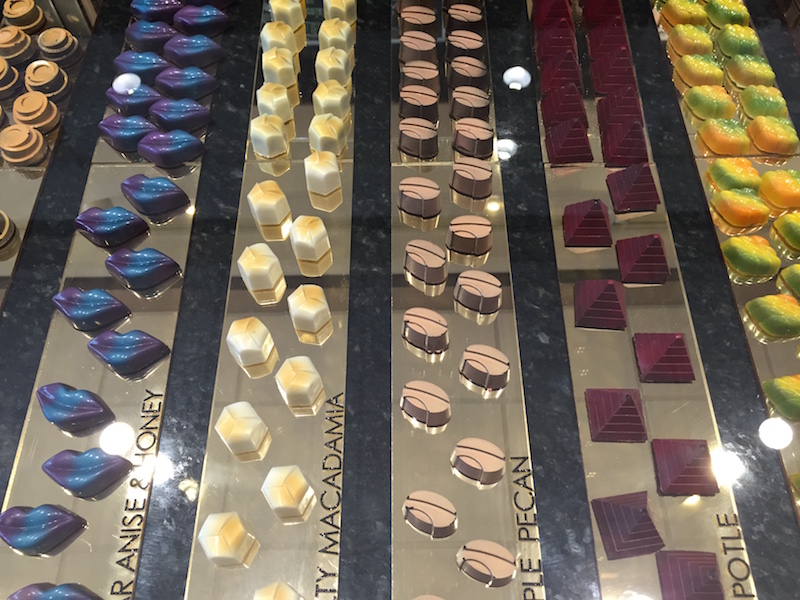 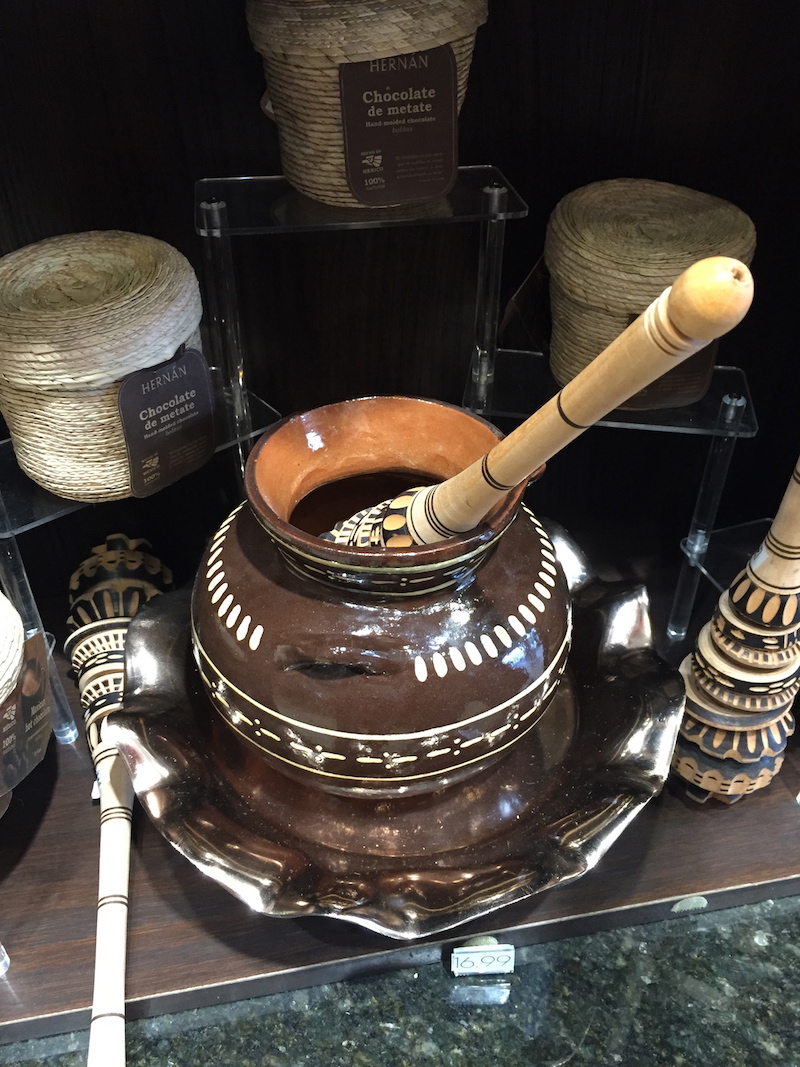 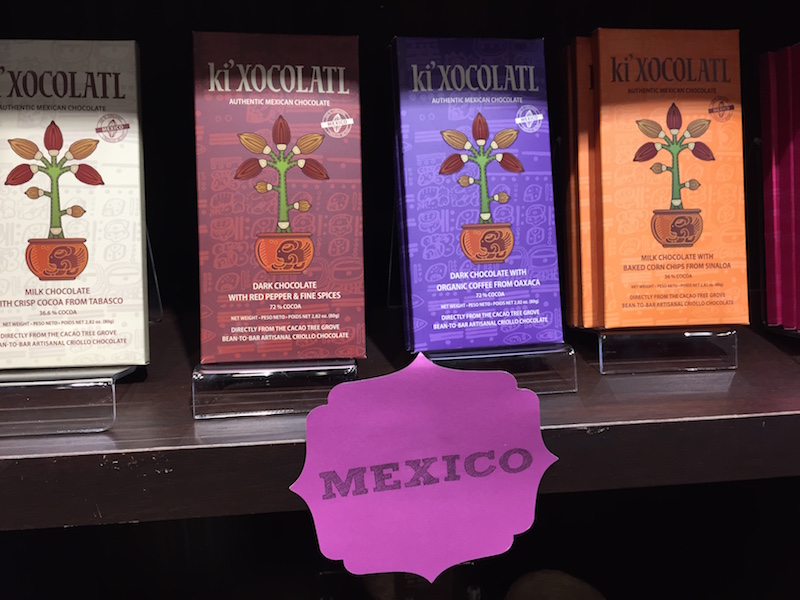 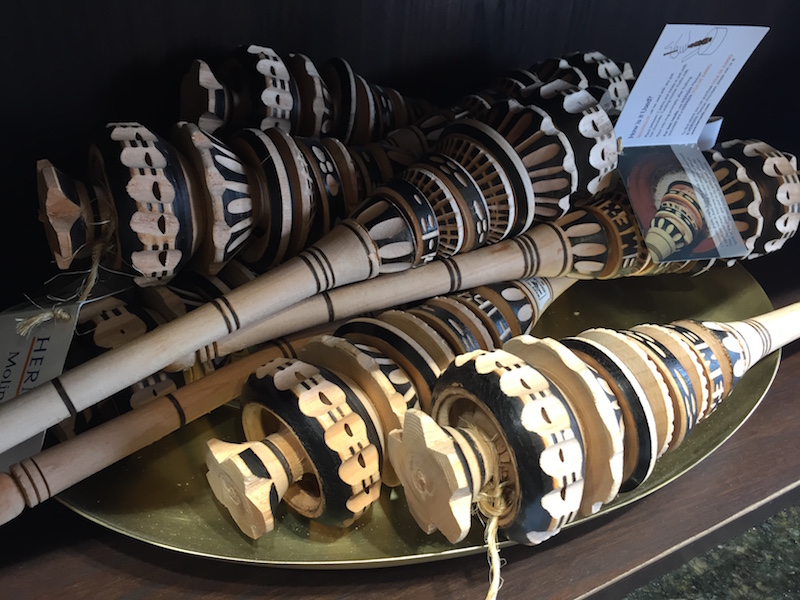 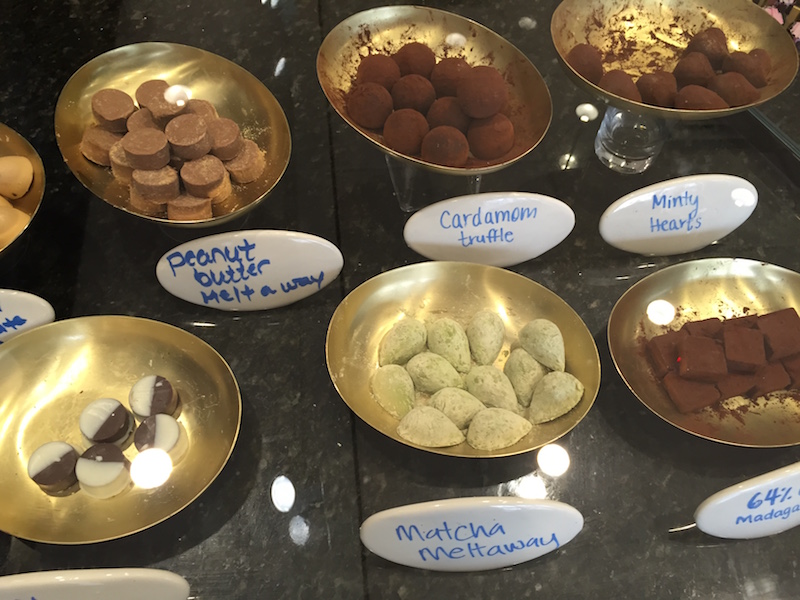 As we were waiting to be served we took a wander around the store…and around the world it would seem. The walls are covered with bars of chocolate from an incredible range of countries, both those with a reputation for good chocolate and many I had never heard of before. Among them were Zottot chocolates from Austria, Nahua from Costa Rica, and Damon from Italy. At the back of the store a large glass window gives you a peak into the kitchen where Annie herself was preparing a new batch of chocolates. Annie Rupani is the owner and master creator at Cocoa & Cardamon chocolate which she opened when she was all of 23 (what were you doing at 23?). Having seen her picture before arriving I suddenly felt like we were in the presence of a celebrity (hot chocolate celebrities are the most awesome kind) so imagine how excited we were when she came out and asked if she could help us. Two hot chocolates please!

Annie Rupani grew up in a traditional Pakistani family in Houston and graduated with a degree in anthropology and religion. She was in the process of filling out law school applications when she came to her senses (luckily for us) and decided to do Houston a huge service and open up a world-class chocolate celebration instead. The first time we visited was at the end of an uncharacteristically wet and cold week in Houston when she mentioned that she had whipped up a batch of chilli hot chocolate using dark Valhrona chocolate which is what I ordered. Rich decided push things a bit further and asked her what else she could offer. She offered to make him a beautiful single origin hot chocolate from chocolate from Madagascar, with fruit and citrus notes. One of those too please.

The hot chocolates came in small little white 4oz mugs which we carried carefully to our table. Mine was beautiful, rich and creamy with just a hint of chilli, enough that it hugs you rather than kicking you. The quantity was enough to leave me wanting more but feeling completely satisfied at the same time. Rich mentioned that his wasn’t very hot at all, but all that seemed to do was to make the citrus flavours stand out even more and make him a bigger fan. He refused to share with me…he always shares.

Since that fateful day we have returned many many times and have never been disappointed. I say it here, on the record, Annie not only makes the best hot chocolates in Houston but is one ridiculously talented and friendly lady. Skip Galleria and spend your money here instead. 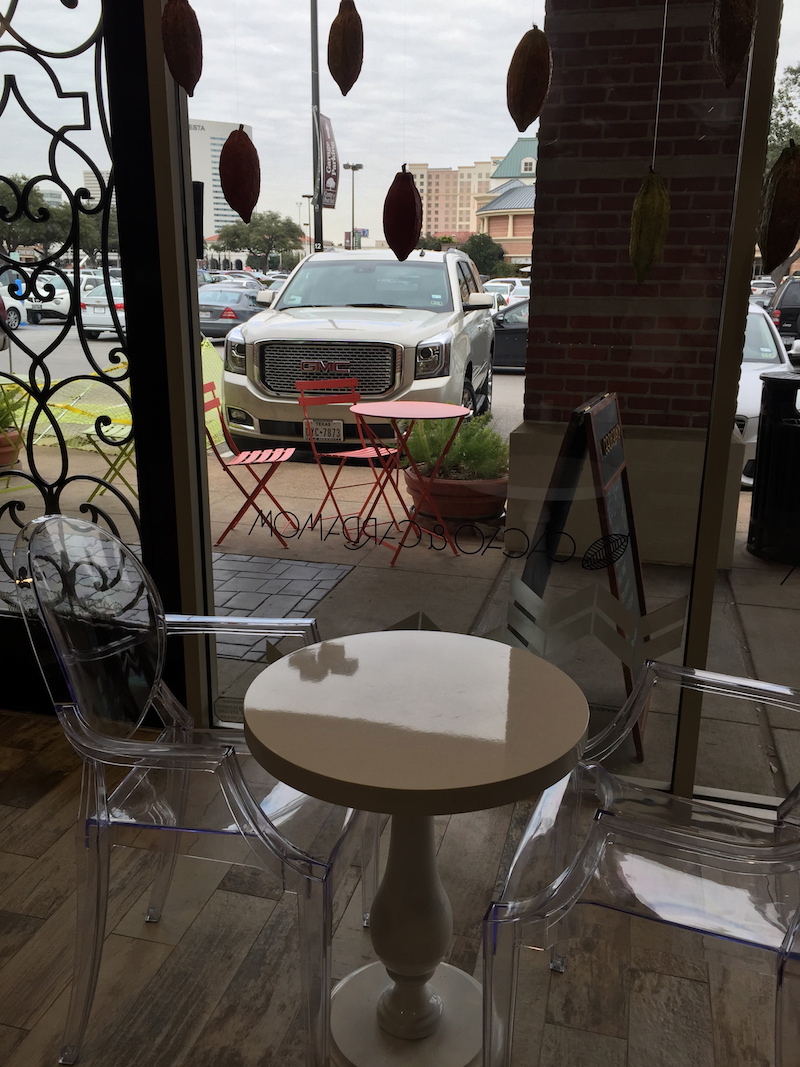 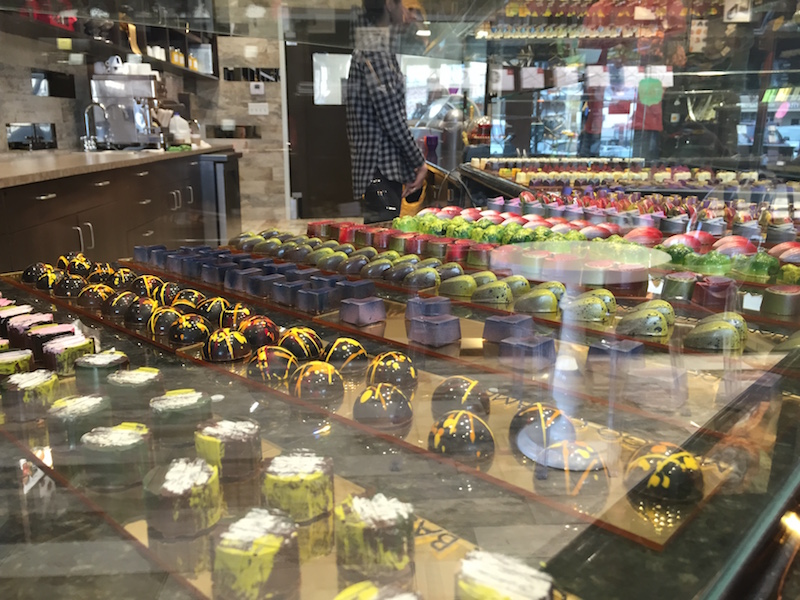 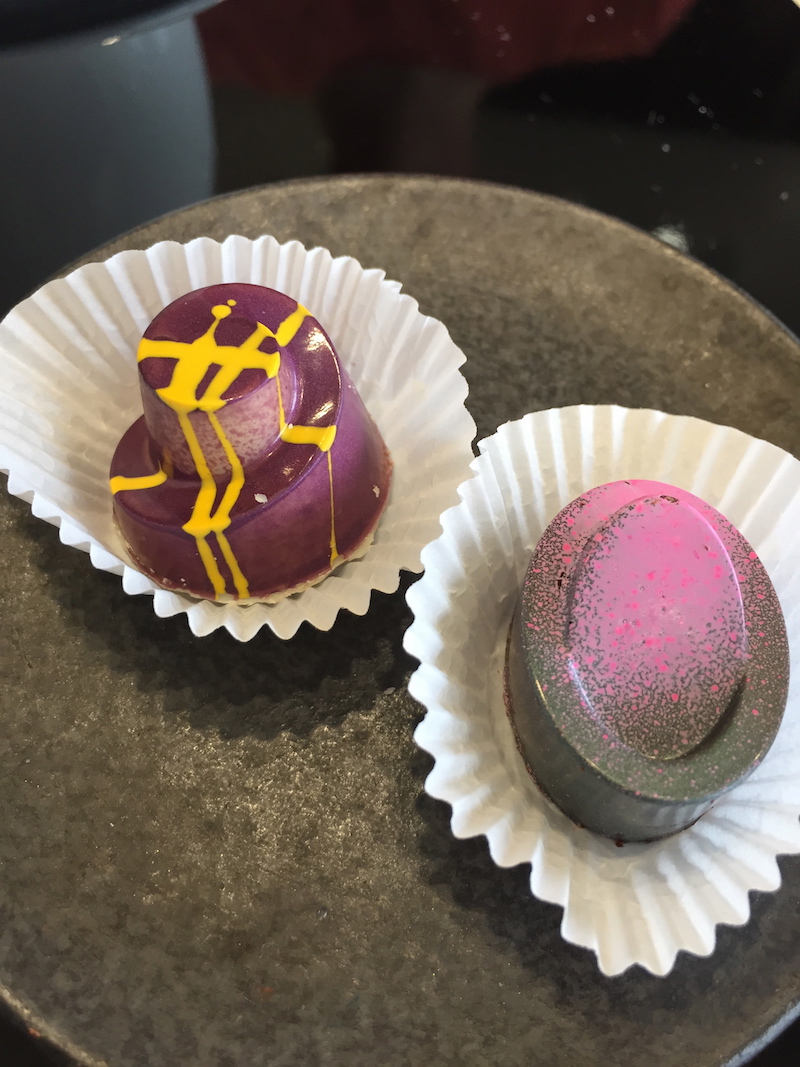 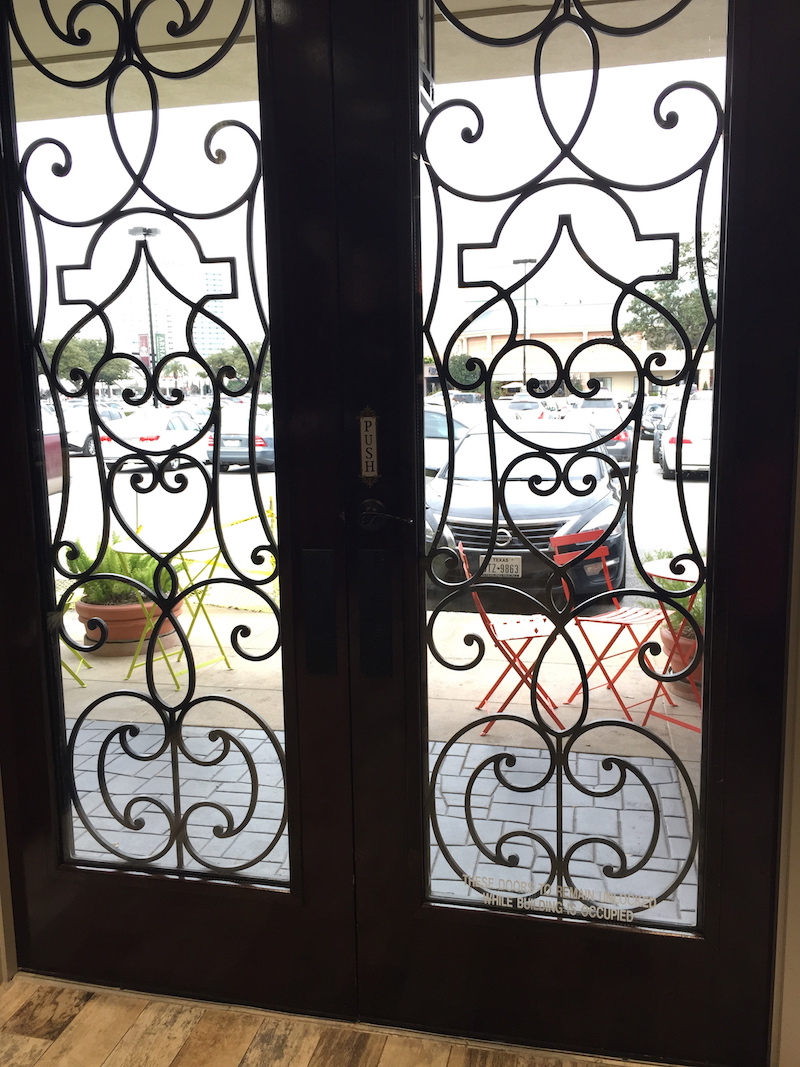 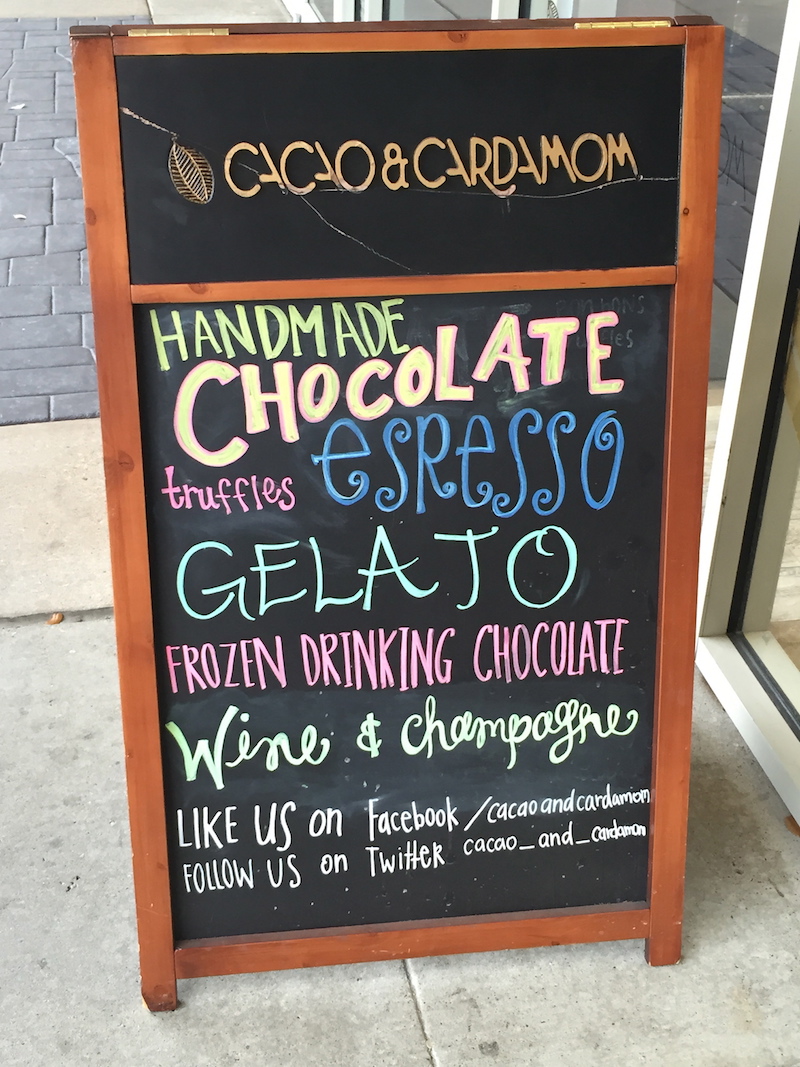 I’m putting together a selection of Aussie hot c

One of my favourite lunches…

Tamaten, a type of marshmallow sold at the market

The hot chocolate at #traveller cafe in @visit.tak

A few new posts up from Takayana, Japan (also the

I need your help Australian chocolate lovers. I’

Last one for this week, from my chocolate bucket l